On Wednesday we had the whole morning and afternoon free before we all travelled back to our respective destinations. Because of this, Rockstar had a little treat in store for us all.

Meeting in the hotel lobby at 10:30am, those of us from the UK (myself, Simon, Adam and Jevon) would be experiencing this treat first - due to the number of us we had to split into two groups, and since we had to fly back earliest, this arrangement made the most sense. We bundled into two cabs, two of us with Bill, the other two with Diego, and headed to Rockstar's offices.

We arrived at the offices, Bill told us that obviously we weren't allowed to take pictures or go wandering around the building etc. So as much as I wanted see some beta screenshots of in-development games I unfortunately couldn't! We casually walked past the notoriously well defended reception desk toward the lifts. Up we went to the fourth floor.

We were then led into a conference room with framed pieces of San Andreas artwork prettying up the walls. Past a table with four Nintendo DS's, we walked over to a giant Nintendo DS that Rockstar had built from a dev-kit, presumably for the sole purpose of demonstrations. We gathered on the sofa in front of this wonderful piece of kit while Job demoed Chinatown Wars to us.

I'll be honest when I say I went in with very low expectations for the game. Having only seen a number of screenshots and not having read to much about the actual gameplay, like some of the other guys I was pretty much expecting GTA1 all over again, tailored for a handheld system. Basically something I wasn't planning on buying, especially since I don't own a DS.

Seeing the game in action

My expectations were off, well off. After just a few minutes of watching Job show the game to us I was amazed, the amount of stuff crammed into this game was incredible. After watching the intro movie we were shown a couple of missions in the game - the first one, and then one later on in the game, which brings me on to a cool feature I know millions of you have always wanted in a GTA game... a mission selector. That's right, once a mission is completed your time for completion is saved, and from interacting with a whiteboard in your hideout you can select a mission giver and mission to replay at your leisure. You can attempt to complete the mission as fast as possible, enabling you to earn medals depending on how well you perform.

The map is huge. Essentially the same Liberty City as you know from GTA IV (minus Alderney), so it should be instantly recognisable to anyone who's played the game. The city is fully modeled in 3D and is played from an overhead perspective. However, unlike the classic GTA's, the camera is able to rotate 360 degrees, allowing the player to see each and every side of the cars and buildings as they move around the city. The game features the 24 hour day/night cycle we're all familiar with, as well as changing weather, even the shadows are dynamically generated.

With the DS designed to be played on the go, you'll find the missions are actually relatively short, yet they pack a hell of a lot of action into them. It's perfect for playing on lunch breaks or whenever you have a spare few minutes. The game is very easy to simply pick up and start playing, features from GTA IV are in, this time everything is accessed via your PDA, so it's instantly there.

The PDA is used quite a lot in Chinatown Wars. You can use it to check your emails, order weapons from Ammunation, see your stats. It also acts as a resource for the in-game economy, and all trade information related to that. Additionally, you can set waypoints on the GPS map - this time, you also have the option of displaying arrows on the road leading to your destination, so you don't actually need to look at the map to see where you need to go.

Social Club integration is also featured in the game. While it wasn't in the build we played, you'll be able to message friends, trade weapons with them all via the WiFi connection. Another cool feature with the GPS map is the ability to save markers as favourites. This will be great for example if one player saves a favourites list with markers for all of the security cameras that need to be destroyed. This player can then trade this list of markers via Social Club. Another example might be a player who has a huge amount of weapons - with so many, he could undercut Ammunation's prices, and other players will buy weapons from him instead, all via Social Club.

I've rambled on a fair bit now about some of the great features of the game, so I'll move on to some of the missions we got to play for ourselves. Sat around a large table, each armed with our own DS and a pair of headphones, we played a few missions. One mission we played was called "Driven to Destruction". In this, you drive a pickup truck with a triad named Zhou Ming in the back. Zhou is armed with a chain gun, and wants to wreak carnage on the Jamaicans, personally. Driving around into Jamaican territory, Zhou lets loose on the rival gang members, filling up a "carnage meter" as you go along.

The touch screen has some nice innovative uses throughout the game. Going back to the start of the game, the very first mission has you trapped in a car, drowning in a river, you have to tap on the touchscreen multiple times to crack the car window, allowing you to escape the sinking car and swim to safety. Another use involved filling up bottles at a petrol station in order to make some Molotov cocktails. Another was during a mission called "One Shot, One Kill". In this, you must kill an informant who is due to leave Castle Gardens Hotel, without alerting the police. Heading to the rooftop of the hotel, you find a briefcase. Using the touchscreen you have to open and then assemble a sniper rifle, screwing in each part into place. Other uses included digging in dumpsters to find weapons, as well as hotwiring vehicles.

On to some returning features now. Rampages are back! I absolutely loved these in GTA3, basically causing as much carnage as possible in the alloted time with a particular weapon. Unfortunately I can't give you any more information on these as they weren't in the build we played - I walked into the icon, only to be greeted with a black screen. Another returning feature is vehicle side missions. So GTA IV did have police car missions, but Chinatown Wars sees side missions such as fire truck, ambulance, taxi, delivery and more all making an appearance. Interestingly, you'll often notice Ammunation trucks driving around. You can actually hijack these and steal all the weapons from inside which is a cool way to acquire the tools you may need.

The in-game economy plays a pretty big part in the game. Six different types of drugs are available in three tiers of fluctuating value. Destroying security cameras in game lowers the risk of selling drugs in that area, as a result, the prices will go down since more dealers will turn to pushing their product there. Each gang and neighbourhood prefers a different type of product, so it's possible to buy low in one area, and make a nice profit on it in another. If you get arrested you'll lose any drugs you're carrying, thankfully there's a solution to this, your hideout contains a lockbox in which you can store your stash.

One more thing I'll talk about before ending my rather lengthy hands-on preview is the new wanted system. At first I wasn't sure about it, but having played it for myself I think it's actually a really fun way of implementing it. In GTA IV you evaded police simply buy getting clear of a radius, or finding a Pay N' Spray. Pay N' Spray garages are in Chinatown Wars, but chances are you'll have more fun not using them. In order to lose cops in this game, you must disable cop cars. Smash, crash and ram your way through police cars as they give chase. The more cars you disable, the lower your wanted level. Be careful though, if you actually destroy a police car completely, i.e. it explodes, killing the cops inside, you'll probably find your wanted level increasing.

There's probably quite a lot I've left out of this preview, which has gone on a lot longer than I expected now that I've finished typing it up. There are always numerous gaming sites with hands-on previews coming up that you can check out for yourselves. If there's anything you want to ask me about the game now that I've got you interested in it, feel free to ask on the forums, I'll do my best to answer any questions you have, there's also a number of missions I didn't talk about if you're interested in hearing about those.

After an hour or so spent with the game, it was time for us to leave Rockstar's offices and let the American webmasters have their turn with it. We waited outside the office until they arrived, chatting for a bit, before we walked around the city to kill a couple of hours before we had to be at the airport. One difference between this and the last trip was the enormous amount of advertising on buildings and billboards we saw for GTA IV. The Lost and Damned (and Chinatown Wars) didn't seem to be receiving the same treatment, and it wasn't until we left a Burger King (a nice healthy lunch!) that we even saw anything to do with the game. But alas, there was one huge building poster just getting the finishing touches put on. Take a look at this below. 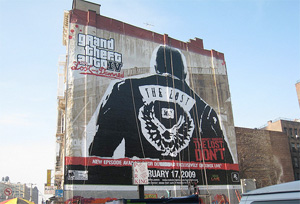 Once again a huge thanks to Rockstar for giving us this awesome opportunity. I had no intention of buying this game before I went to New York, but now after having seen and played it for myself I'm going to have to go and get myself a DS to play this game once it comes out, it was so much fun to play and typing this preview up has only made me want to play it even more! Even when we'd left Rockstar, we were still talking about how good the game was and just how impressed we all were!