Tuesday: Playing The Lost and Damned

We met in the lobby around 10:45am, Blair (illspirit from GTANet) arrived soon after, and half an hour later or so we decided to head out into NYC and walk around. 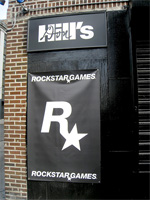 After about an hour of wandering we decided to head to Rockstar's offices on Broadway for a second attempt at getting in. Our first attempt last April didn't work unfortunately, thanks to a very strict receptionist. On the way, I got a call from Iffy at Rockstar letting me know that another webmaster had arrived and that the van was at the hotel and will be ready to take us to the event once the other webmasters arrive. With this in mind, and knowing the others would be there shortly, we made our way back to the hotel where we met Kyle (GTAGaming), and a few minutes later Casey (also GTAGaming) and Gerald (GTAWH) both arrived. Shortly after we got in the van which took us to the event, set up in Don Hill's club. They were still "setting up" when we got there, and security was so tight we had to wait outside, a few minutes more of waiting around Diego from Rockstar turned up and even he couldn't get in since they couldn't confirm he was actually a R* guy. Bill came out of the club a few minutes later and spoke to us for a bit before stealing Diego back from us. At least 10 more minutes of waiting around before we were actually allowed to come in, we even had a little R* wristband to wear!

So we enter the club and we immediately see all the TV's set up opposite the bar and through a seated area. it was nice and dark inside, a couple of motorbikes were parked on stage, so the atmosphere was great. We all kinda stood there for a few seconds, expecting some sort of introduction to be played to us, but no. One of the Rockstar guys said something along the lines of "What the hell are you guys doing? Play the game!". Me and Psy went straight for the nearest two TV's and sat down there. The Lost and Damned was already on the screens with the first mission started, waiting for us to take control, so we did. We played the first couple of missions before we decided to piss about and have some fun.

The Lost and Damned was looking like a great game already. Grungy textures have been applied to the HUD and menu items which gives it a more relevant look. Other new graphical changes include a new "noise filter", though if you don't like the effect it gives you can simply turn it off in the options. From what we had seen of single player story, it was pretty cool to roam around in a pack of bikers. Something fresh for GTA. Loads of action goes on in the first few missions, a lot of rival gang members are killed, as are some of your own.

The Lost's clubhouse is pretty big and consists of several floors, with various activities to do on each level. New activities include:

I played one or two more missions after that, before we all grabbed some pizza and a drink, then got down to the new multiplayer modes. Before I talk about those, I'll just talk about some of the other changes and improvements that have been made.
Handling on bikes has changed for the better, you no longer fall of easily, and turning is more responsive and quicker. It also feels a lot different playing as part of a close team of gang members. The rest of your gang all have their own names, and if one dies while on a mission with you, you'll see his picture in the clubhouse which is a pretty cool feature.

I noticed numerous new stats in the options, "people killed by pool cue", "seagulls exterminated", "bikes delivered", and something like "laundry washed" - not sure exactly what some of those are about, and I saw no seagulls in game.

You'll see a number of new vehicles and weapons in the game, which you'll no doubt have seen in recent previews. The automatic pistol is probably one of the best additions, it's not that powerful, but the rate of fire and the sound it causes makes it feel a lot more powerful than it is. The shotguns are nice too, more powerful than you would probably imagine. The grenade launcher we had mixed feelings about. We all agreed it was a brilliant weapon, but it is a bit annoying that the grenades don't explode on impact, which gives players a couple of second to escape the blast radius. Pipe bombs are nothing special to be honest, they seem to have exactly the same properties as normal grenades. One other new feature is being able to use weapons like shotguns and baseball bats while on a bike, which is good in races for "whacking off" opponents.

Moving on to multiplayer, I wasn't really expecting much, but I was pleasantly surprised by some of the new modes on offer. We started off with some familiar game types though. A quick deathmatch to begin. Mirroring my performance at last year's event, I pwned once again, winning (though not by much) the first game :P
Next was a race, and Psy won that, also mirroring his performance at last year's event. A quick team deathmatch followed that, leading us up to the new stuff.

Lone Wolf Biker - One of the best new multiplayer modes is Lone Wolf Biker - one player is the target and every other player must kill him. The target must hit various checkpoints to continue scoring points, so those wanting to "camp" won't actually get very far in terms of score. The winner is the target who survives the longest. Once a player becomes the target, they are invincible for 10 seconds to allow them to get away from the chasing pack.

Witness Protection - Similar to Cops N' Crooks, one member of the cops team must escort three witnesses to police stations in a prison bus, while the team playing as The Lost tries to prevent this from happening by destroying the bus (which by the way is incredibly difficult) or alternatively by killing the witness as he leaves the vehicle.

Chopper vs. Chopper - This is a 2 player multiplayer game mode, however it's quite a bit of fun. Me and Psy were the only guys who got to play this as it was done right at the end of the event when everyone was starting to finish up their games. Basically, one player is a member of The Lost and is on their bike, they are being pursued by the other player who is in an Annihilator, which, in this game mode only, shoots exploding shells. If you're the biker, you'll notice the whole screen shake if the other guy is shooting near you. It was a lot of fun though.

There are a few other new modes, but you'll read about them in multiplayer previews. Summing up my feelings on The Lost and Damned; Well, it's definitely worth every one of the 1600 MS points it'll cost you. I wasn't sure about the whole biker theme when it was first announced, but after having played the game I now really like it. I think it brings a new atmosphere and general feeling to the game. Johnny is obviously a completely different character to Niko, and playing as him with your gang members on your side during missions is a nice change. It's a pretty big game too, roughly a third of the size of GTA IV in terms of storyline. Granted, it's obviously using exactly the same map and roughly the same feature set, but the various improvements in vehicles, weapons and mini-games give it that extra depth it needs. I'd certainly recommend you buy The Lost and Damned, it's great fun! 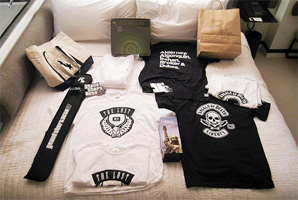 Upon leaving the venue we were handed a ton of free stuff by Rockstar. A couple of R* goodie bags with various items of swag in them, but perhaps the biggest treat was a limited edition Lost and Damned themed Xbox 360 Elite! Unfortunately an American NTSC version, but incredibly awesome nonetheless. I also took a whole bunch of sheets with Lost and Damned stickers too, which I'll probably end up giving out to anyone who wants some. 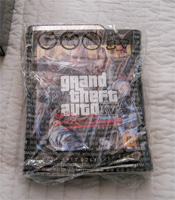 We came back to the hotel, dumped our mass of free stuff and were in our rooms for about half an hour before going down to the lobby to meet up again and be taken out to dinner by Cathy and yet another Rockstar named Mike. We went to a barbeque restaurant and it had pretty decent food there. We actually spent quite a lot of time there as we ended up talking to both Mike and Cathy quite a bit after we had finished eating.

After eating we went up the Empire State Building, the second time for us UK webmasters who had gone up in the day time last year. The city looks great at night, and I'm sure you'll see that if you look at some of the pictures I snapped while up at the top. 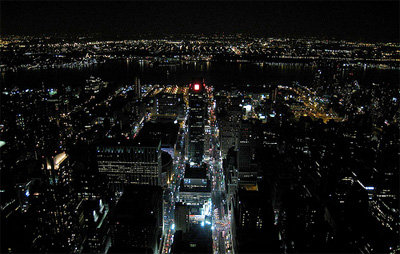 We got back to hotel after a random limo ride back from the Empire State Building. Most of us sat in the bar for a few hours, until about 2am actually, though last orders were at 11:45pm so we were just sat around talking for ages. Bill and Diego were there for about half an hour of that time. Bill said how much R* appreciate the support the fansites give them, and that they hope more trips can be planned for us in the future, so we hope those can go ahead!

At this point I'd like to say a huge huge thank you to everyone at Rockstar Games, especially those directly involved with us for this event; Mike, Mike, Mike, Iffy, Cathy, Bill, Diego, Job and everyone else who had anything to do with us. You guys are awesome. Much respect to R*.

You may be thinking there's an extra day I haven't written about yet. Well there is, but we're not allowed to post about that until next week! Stay tuned to TGTAP and look out for updates on that.

UPDATE 19/02/09: The final part of this event is now up. Head over to the next page to read my hands on preview of Chinatown Wars!