Viewing news posted in May 2004?noMobile=true

A newer version of the Vice City camera hack has been released so I added it to our database. It has many new features and a lot of bug fixes. Go to toca.game-editing.net if you want to read the full feature list

Rockstar released a new screenshot just for all the GTA fansites, it shows "CJ outside the Los Santos convention center, which bears more than a passing resemblance to the home of E3!"

I tweaked the layout slightly to reflect the red/orange colours of San Andreas.

If you are still seeing old pages/images then press Ctrl + F5 to force a refresh and you should see the updated page.

Could Lazlow Return In San Andreas?

It's quite possible, Alex from GTANET emailed him and asked him whether or not he would return, in his reply, Lazlow stated this:

thanks for the email.

the answer to your question is simple.

i'll leave it at that.

So maybe he will, if the answer is simple then I take that to mean that he will return in San Andreas

This is some awesome new San Andreas info here, it's a summary of what will be in GameInformer's upcoming magazine.

Full Credit to GTAGaming for the info.

A couple of news stories

Just thought i'd post a couple of news stories to calm the excitement down from the screenshots, the first of which is from the magazine 'Game Informer' who have conformed they will be giving us the world exclusive preview of San Andreas

Game Informer Magazine will unveil the first look at one of the year’s most anticipated and closely guarded gaming titles today at the 2004 E3 Expo in Los Angeles. Advance copies of the magazine are available at Game Informer’s booth, located at the entrance to the West Hall.

While there won't be an ounce of Grand Theft Auto: San Andreas leaked at E3 2004, the first place in the world that you'll be able to get details is in Game Informer Magazine...

Read The Rest Of This

The second story is from Gamespot, they are saying that Rockstar have released plot details but i'm not sure how real they are.

If you can't be bothered to read it all just skip down to the bottom where I have summarized it all.

Early, this morning, Rockstar released the first plot summary of GTA: SA, which confirmed its early 1990s millieu. Here it is vertbaim:

"Five years ago Carl Johnson escaped from the pressures of life in Los Santos, San Andreas...a city tearing itself apart with gang trouble, drugs and corruption. Where filmstars and millionaires do their best to avoid the dealers and gangbangers.

Now, it's the early 90s. Carl's got to go home. His mother has been murdered, his family has fallen apart and his childhood friends are all heading towards disaster.

On his return to the neighborhood, a couple of corrupt cops frame him for homicide. CJ is forced on a journey that takes him across the entire state of San Andreas, to save his family and to take control of the streets."...

Read The Rest Of This

So from this I have gathered these facts:

http://www.rockstargames.com/sanandreas/ has been updated with a nice new Flash intro and they've added the first few screenshots too!

I'm going to put up a page which will have the official screens as they are released so be patient and it will appear soon, oh and there's only 3 so far so don't get completely hyperactive

Screen 01: Shows a group of gangsta's pointing guns leaning out of ALL the car windows

Screen 02: A guy crounching down aiming a gun at us

Screen 03: Some guy riding a bicycle

This car has been around for ages but I havent seen it at many sites for download so I decided to add it here, also 5 more cars coming soon.

It's made by Nathan and it looks awesome, just look at the screen I took 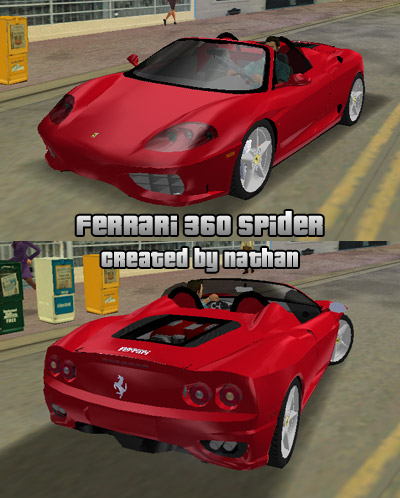 In this months Game Informer magazine it says:

Enjoy our Halo 2 cover story, and be sure to check back with us next month when we bring you perhaps our biggest cover story yet. What game is it? I can't reveal this monster title just yet, but I can promise you that it's been something you've been dying to see, and we'll have the exclusive first look.

Lets just hope it is

This mod will replace the single red colour with shaded blood textures so it looks much better and also makes more blood appear on screen and makes it last longer too. By ¥End»»» & L33tEDGE 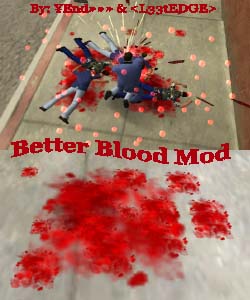 Over the past few days I have been busy gathering downloads and getting screenshots for all of them and I have now added most of them.

So take a look round our Download Database and look at all the great new files.

In other news I added the filesize mod to pafiledb so now on each file download page it tells you the accurate size of the file.