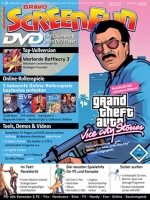 Screen Fun, a German magazine, has a preview of Vice City Stories in their latest issue. Details are a little bit scarce at the moment, but I'll summarise what we've heard so far.

There are three new scanned screenshots too, along with one other we've already seen, high res but rather grainy:

As well as three artworks depicting some new characters:

Thanks to Medalion Man @ GTAForums for the information.

Sweet ass. Can't wait. It's going to pretty much kick all sorts of ass.

Yeah, I'll update the post when I get more details. I hate it when these European mags get previews, it's a pain in the arse getting the damn thing translated. It's like a semi adrenaline rush anticipating the new info, if any.

AW f***ING RIGHT!!! I hated it when I would drive in a rich district with sports cars and I would only see either a cheetah, infernus, etc and not all of the sports cars that should spawn in that area. THANK YOU GOD!!! Time to go and add more to my topic!

What about this screen?

It's old, that's why I didn't post it although actually it does look a little different. Anyway I just updated my post becuase I've decided to host the scans myself now.

Nice pics. Wonder who those 3 artworks of people are? First one looks like some big tough guy (lol), second looks like crooked cop and third looks like an old redneck.

Nice pics Chris! It's good that many of the missions in the latter stage of the game will use helicopters, as they were not used much in previous GTA's.

Hey chris, next time wait 10 more seconds before i can give you the update before neil! lol

What? You commented on the wrong story, I had this one before Neil, it's the one I posted a few hours ago he got first.

Oh crap, i have posted comment in wrong area!